How To Supplement With Creatine The Right Way

Creatine has been used as a performance enhancer by a significant number of people since the early 90’s. 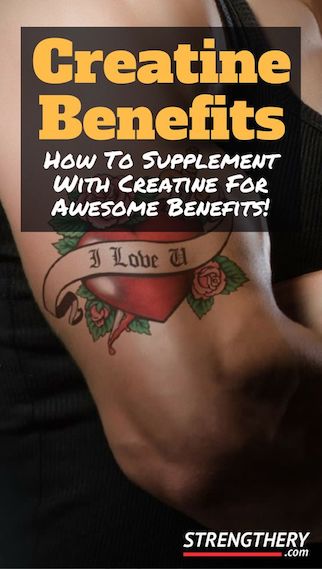 Particularly strength and endurance athletes, bodybuilders and professional sportsmen in general, have shown to benefit from supplementing with creatine.

If you want to enjoy the benefits you need to know how to supplement with creatine.

If the word “performance enhancement” raises your suspicion, I can reassure that it has never been on the World Anti-Doping Agency’s list of prohibited drugs.

Furthermore, the most popular type of creatine called creatine monohydrate is a natural component that is already present in your body – primarily in your skeletal muscles.

Whenever you are consuming meat and especially red meat you are getting a small amount of creatine. However, this dosage is far from being enough to experience any effects of significance.

Unless you want to eat several kilograms of meat everyday supplementation is your only choice.

This fact clearly separates creatine from protein supplementation (protein powder). You actually “need” to supplement with protein since you can get it through your normal diet.

If you want to know more about protein powder, you can check out my other article.

How Does Creatine Work?

Creatine acts as a so-called precursor to Adenosine Triphosphate (ATP), which is the form of chemical energy used by all cells.

That creatine is a precursor to ATP simply means that your body can easily produce ATP with help from creatine. The more technical answer is that creatine plays a major role in the chemical reaction/metabolization that recycles ATP.

If you want to look through detailed information yourself, you can check it out on Wikipedia here.

When supplementing with creatine the amount that gets stored in the muscles is increased drastically and that consequently leads to an increase of the potential energy readily available for the muscles.

This results in the ability to work both harder and longer.

In practical terms that mean, you might be able to do that 1-2 extra reps or have that extra bit of strength to break your PR (personal record) on any lift.

According to research, the average increased performance is around 5 – 15 %.

If you are doing a proper workout this enhancement will lead to an increased growth rate of strength and muscle.

How To Use Creatine

Creatine is taken daily with a normal dosage of 3-5 grams.

It doesn’t really matter what time of the day you are taking it or if you are taking it with or without food. But if you chose, for example, taking it in the morning try to stick with that time as that will lead to a better partitioning of the creatine.

When you are first starting out using creatine it takes a long time before it really works.

This is because the creatine stored in the muscles is building up gradually day by day before reaching full muscle saturation which is when it is fully working. This usually takes up to 4 weeks unless you do a loading phase.

It is very important that you make sure you are getting enough water while using creatine, and I would recommend that you increase your water intake. The creatine stored in the muscles will actually bind a lot of water, which is why a side effect of taking creatine is increased water weight.

The creatine stored in the muscles will actually bind a lot of water, which is why a side effect of taking creatine is increased water weight. Creatine will hold more water in your body.

Research has shown that it is possible to reach the point where muscles are fully saturated with creatine much faster by temporarily increasing the daily dosage by 4-5x for about a week and then drop to a normal dosage after for maintaining creatine levels.

Comparatively, this leads to creatine fully working within the body about 4 times as fast which is of course great.

However, it is not everyone who is getting that kind of fast result. Also, this relatively high dosage can for some people result in unpleasant side effects like stomach pain and nausea.

If you decide to do a loading phase, it is even more important to drink plenty of water to prevent dehydration.

As most people, I am impatient by nature but after trying a loading phase once I won’t do it again.

I had an upset stomach and occasional stomach pains every day. I will not recommend against doing a loading phase, but if you like me experience stomach problems I would recommend that you drop it immediately and do normal dosage instead.

Some people and even a few supplement companies will due to health concern recommend that you “cycle” your creatine intake meaning that you after around 6-8 weeks of taking creatine have a break of 3-4 weeks before using it again.

This is not necessary at all. Research has proven that there are no health concerns related to taking a daily dosage of 3-5 grams of creatine long term.

The only concern that might make you want to stop using creatine is dropping the excess water weight. This could be relevant for fighting sports where body weight is a concern. This is something to be aware of when you are trying creatine for the first time.

Instead of buying in bulk you might want to try a small pouch first.

For me, creatine works well, and I would recommend anyone to try it.

There are many different variations of creatine. The one that has been researched the most and has the best proof of working is creatine monohydrate.

Because of this I will just skip explaining the other variants and simply recommend that you use creatine monohydrate, which is also the cheapest option.

You can get creatine monohydrate in liquid or powdered form. The powdered form comes in two versions: “normal” and micronized.

The powder is sold both in containers to be mixed with liquid by yourself or in capsules.

The micronized version of creatine has smaller particles than the “normal” which means that it mixes much better.

I have tried both and I can say that easier mixing really matters, it makes it no problem to just mix in a glass of water.

It is also claimed that the smaller size makes it easier for the body to absorb, but I believe that claim is still controversial.

The king of pure and finest level of micronized creatine monohydrate is the manufacturer AlzChem in Germany. They produce 99.99 % pure creatine free of impurities and irrelevant by-products under the name Creapure. If you want the purest creatine this is your choice.

AlzChem is a manufacturer and only sells directly to supplement companies. Look for the label/term Creapure® on the product you are buying, to be sure you are getting the purest.

Other than Creapure another way to check if you are getting pure creatine is check the rating from a testing company. The supplement rating and reviewing company called LabDoor is a well-known and recognized company.

Other Benefits And Side Effects Of Creatine

As I have stated in this post, creatine is perfectly safe to use. Besides the extra water retention, there are to my knowledge no documented negative side effects.

However, through my many years of working out and studying many different things related to fitness and strength training, I have read a few testimonials from people experiencing headaches and light-headedness.

My guess would be that these unpleasant side effects are caused by dehydration, which really emphasizes the fact that you need to be serious about getting enough water.

Try to drink at least 2 liters of water or more throughout the day. You just can’t hydrate by drinking it all at once.

More Benefits To Your Muscle And Brain

Besides increasing strength and muscle gain, some research suggests that supplementing with creatine accelerates muscle recovery.

Furthermore, there is some evidence that it might assist in retaining muscle mass if you are in a calorie deficit.

Finally, perhaps a surprising benefit is that supplementing with creatine boosts brain performance.

This is because a small part of the naturally occurring creatine in the body is stored in the brain, where it has an important role in supplying energy to the brain.

Creatine supplementation also gives a big boost to the creatine amount in the brain, and because of that, it can boost brain performance.

What Happens When I Stop Taking Creatine?

When you stop taking creatine, its effects will slowly start to wear off as it is no longer replenished daily. It is simply the reverse as when you start supplementing with it.

This means that you will gradually drop the added water weight, but you will also lose the performance boost you gained from creatine.

Your Strength And Muscle Is Not Lost

Some people say that you lose strength and muscle, although relatively this is correct you are technically not losing anything because what you are losing is proportional to what you gained from taking creatine.

You never had this level of performance in the first place. Also, the decrease in muscle size is just the excess water leaving the body.

However, this doesn’t change the fact that subjectively you might have a strong negative feeling of losing a lot of strength and muscle size. You might feel that taking creatine is pointless since you lose it all once you stop taking it.

Luckily this is not correct since even without the extra creatine you will still be reaping the benefits of the increased growth in your strength and muscle which you wouldn’t have experienced if you didn’t take creatine.

So at the end of the day, you end of a bit stronger and more muscular than you would have been if didn’t use creatine.

Obviously, you will also be missing out on the other benefits from the creatine. Perhaps a bit amusing you will even be losing the boost to brain performance. This part is much more hard to quantify, but I have never heard anyone talking about getting dumber.

When all that is said, you have to realize and understand that there is nothing forcing you to stop taking it. I am not saying you should supplement with creatine from now until you die, but there is really no argument against using it.

The Creatine I am Using

You can buy decent creatine monohydrate in almost all fitness supplement stores. Both online and offline.

The creatine I am currently using is from Myprotein.com where I also get my protein powder.

I like Myprotein because the quality of their products is great and the prices are competitive.

You can check out their creatine here.

If you have any questions feel free to leave a comment. Also, I would love to hear about your experience with creatine 🙂